Tinkering With The Machinery of Death

Nebraska has wasted tens of thousands of taxpayer dollars in failed–and potentially illegal–attempts to secure lethal injection drugs. There has not been an execution in Nebraska in over two decades with the last execution taking place in 1997. In 2008, the state’s only method of execution, the electric chair, was declared cruel and unusual punishment by the Nebraska Supreme Court.

The Nebraska Legislature approved lethal injection in 2009, but has never been able to obtain the drugs needed to carry out an execution. As public pressure for repeal grew, so did the State’s attempts to obtain drugs.

Since 2015, Nebraska has wasted tens of thousands of dollars in taxpayer funds on drugs that will never be used in an execution. Governor Pete Ricketts used his office to influence a death penalty ballot question before Nebraska voters in 2016. Since 2016 the Department of Corrections, the Governor, and some state senators have all been working to keep information about lethal injection procedures secret.

On November 9, 2017, the Nebraska Department of Corrections issued a notice of substances to be used in an execution of Jose Sandoval. This must be issued 60 days in advance of seeking a death warrant from the State Supreme Court. On January 19, 2018, a second notice was issued to Carey Dean Moore. While the State has yet to issue a warrant for Mr. Sandoval, the Nebraska Supreme Court granted the state's motion for Carey Dean Moore. His execution is scheduled for August 14, 2018, at 10 a.m. at the Nebraska State Penitentiary.

Nebraska Taxpayers Are Still Waiting For a Refund

In 2015, fiscal conservatives, faith leaders and long-time death penalty opponents worked together to repeal the death penalty in Nebraska. Senator Ernie Chambers of Omaha, an independent and the only African American in the Legislature during his tenure as Nebraska’s longest serving state senator, led the fight alongside Senator Colby Coash of Lincoln, a fiscal and religious conservative. Governor Pete Ricketts made a last-ditch effort to persuade senators by announcing that Nebraska obtained drugs to carry out an execution. This effort failed and on May 27, 2015, the Nebraska Legislature overrode Ricketts’ veto and replaced the death penalty with a life sentence.

What about the drugs Governor Ricketts announced? An investigation from the ACLU found that Nebraska spent $54,000 on drugs from India-based Harris Pharma, a well-known supplier of execution drugs to U.S. correctional facilities with no medical background.

The ACLU’s investigation found that both the Food & Drug Administration (FDA) and the Drug Enforcement Agency (DEA) had warned Nebraska that there was no way to legally import the drugs that it had purchased. The ACLU asked the U.S. Attorney for the State of Nebraska to investigate.

The drugs never reached Nebraska and expired while sitting in an import dock. The $54,000 paid to Chris Harris was never returned to Nebraska. The Nebraska Auditor of Public Accounts has opened an investigation into this purchase.

Running Referendum from the Governor’s Office

Following his legislative defeat, Governor Ricketts and his parents provided 80% of the initial funding for a ballot campaign to bring the death penalty back. By November 2016, they had provided 30% of the campaign’s total funding.

Governor Ricketts formed Nebraskans for the Death Penalty as the corporation to gather signatures, attract voters, and otherwise pull off his referendum. He peddled his influence as governor of the state of Nebraska to entice supporters, recruit staff, attract donations, and pay for ads. 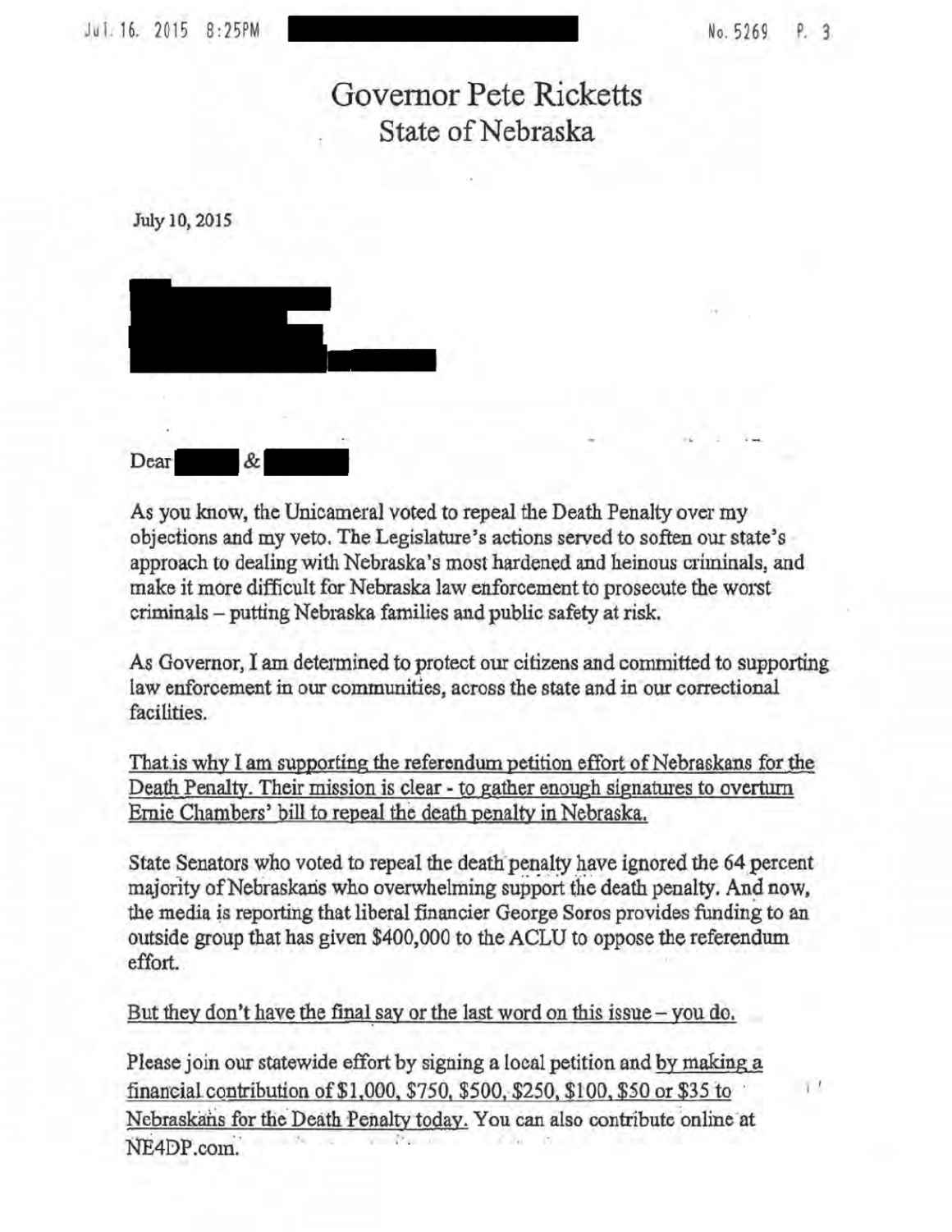 Governor Ricketts encouraged, and at times ordered members of the executive branch and his allies in the Legislature and local governments to work for the referendum campaign or to express public support for it. For example, the State Treasurer, Don Stenberg, was simultaneously a leader of the campaign in the first few months, serving as Co-Chairman with State Senator Beau McCoy. In the middle of the campaign, Governor Ricketts rewarded Jessica Flanagain (formerly Jessica Moenning), the campaign manager and coordinator , with a publicly paid position in the government as special advisor to the governor for external affairs, with a salary of $130,000.

In November 2016, Nebraskans voted to reinstate the death penalty. In December 2017, the ACLU filed a lawsuit on behalf of the current members of death row, challenging this violation of the separation of powers. The suit argues that the Governor’s involvement in the ballot initiative was improper and therefore the Legislature’s abolition of the death penalty remains in effect. Alternately, the suit also argues that even if the death penalty has been properly reinstated for the future, those individuals on death row at the time of the Legislature’s actions were transformed to life sentences and the voters did not change their individual sentences. In February 2018, the trial court dismissed the ACLU suit without having a trial and without depositions or other evidence of the Governor’s involvement. The ACLU has appealed the case and as of July 2018, the appeal is pending before the Nebraska Supreme Court.

Shortly after the November 2016 election, the Nebraska Department of Corrections announced new lethal injection protocols that would keep all information about the drugs to be used in an execution secret. The ACLU, members of the media, medical professionals, and other stakeholders, objected to the secrecy provisions at a public hearing. In response to public outcry, before the new protocol was passed, the secrecy provisions were removed.

An ally of Governor Ricketts in the Nebraska Legislature, Senator John Kuehn of Heartwell, Nebraska, introduced legislation in 2017 that would keep all information about the drugs secret. So far, the legislation has not been adopted.

After years of turning over public records about the states attempts to secure lethal injection drugs, in late 2017 the state suddenly refused to supply information about the lethal injection drugs in open defiance of Nebraska’s strong open records laws promoting government transparency. In October of 2017, drug manufacturer Pfizer warned Nebraska that its drugs were not to be used in executions and asked for the return of any drugs manufactured by Pfizer. Other pharmaceutical companies have sent Nebraska officials similar warnings and prohibitions against using their medicines in executions.

Keeping these records secret prompted the ACLU to file a lawsuit in December 2017, arguing that Nebraska’s withholding of the records violates public records law.  Members of Media of NE Inc., a media association in Nebraska, filed a case that was joined with the ACLU suit. Following a trial in May 2018, the trial court ruled in the ACLU’s favor, ordering the department to release the records to the public. The state has filed an appeal and as of July, 2018, the appeal is pending before the Nebraska Supreme Court.

On November 9, 2017, the Nebraska Department of Corrections issued a notice of substances to be used in the execution of Jose Sandoval. This notice must be issued 60 days in advance of seeking a death warrant from the State Supreme Court. On January 19, 2018, a second notice was issued to Carey Dean Moore. While the State has yet to issue a warrant for Mr. Sandoval, the Nebraska Supreme Court granted the state’s motion for Carey Dean Moore. His execution is scheduled for August 14, 2018 at 10 a.m. at the Nebraska State Penitentiary.

Nebraska is wasting time issuing notices of executions when it does not have a way to obtain lethal injection drugs legally. These aren’t the only problems plaguing the Nebraska Department of Corrections, which is housing 2,000 more people than the system was designed to hold, prompting another lawsuit from the ACLU.

Individual lawsuits for members of Nebraska’s death row are pending. The most recent one was filed by Marco Torres, John Lotter and Nikko Jenkins and argues that they were unconstitutionally sentenced to the death penalty. In 2016, the U.S. Supreme Court declared Florida’s death penalty sentencing process, similar to Nebraska’s, unconstitutional.

Despite the mounting legal claims against the Nebraska Department of Corrections, the State of Nebraska continues its attempts to illegally obtain drugs for lethal injections.

In March of 2018, the ACLU of Nebraska filed a formal complaint with the federal DEA, arguing that the Nebraska Department of Correctional Services and the Nebraska State Penitentiary have or intend to violate federal controlled substances laws.

Nebraska state law is clear: every regulation has to go through a clear, transparent, public process before it can be made official. In 2016, the Nebraska Department of Corrections announced it would hold a public hearing on their proposed new execution protocols for future lethal injection executions. Reverend Steve Griffith and State Senator Ernie Chambers both attempted to use the public hearing process to share their opposition to the draft regulations, but they were thwarted by the state’s failure to comply with the right procedure. Reverend Griffith was turned away when he tried to obtain a copy of the materials to prepare his testimony in advance.

In March, 2018, ACLU of Nebraska filed suit under the Administrative Procedures Act, arguing the state may not use the current regulation and instead must start the process over to meet the requirements of the law.  In June, 2018, the trial court dismissed the ACLU suit without a trial or evidence taken on the claims. As of July, 2018, the case is pending on appeal.

ACLU asks US Attorney to Open Investigation of Nebraska Officials...