Elected officials and government agencies are using social media now more than ever to communicate with their constituents and the general public. In recent years, the ACLU has received a growing number of inquiries from Nebraskans across the state and political spectrum about whether public entities and elected officials can block social media users from viewing accounts or from engaging with the content on these pages. Blocking can happen for various reasons but commonly occurs when individuals express their feelings on hot-button issues or disagree politically or personally with an account holder or another user. Examples include a user being blocked from commenting on a page after criticizing an elected official’s position on an issue or a user being blocked from viewing a page altogether after the user engaged in a debate with another user in the comment section of a government entity’s account.

This toolkit does not address all issues regarding online speech and activity by government and elected officials, including, but not limited to, public meetings laws, public records laws, libel, copyright, defamation, student or employee privacy, or rules regarding speech rights of government employees generally. Please note this toolkit is not applicable for online speech by private individuals or businesses because the Constitution only protects us from government action.

Please note that by sharing this toolkit, the ACLU is not offering to be your attorney or represent you but is providing this general guidance as part of our public education efforts to help people know and understand their rights and empower them to take action on their own behalf.  The use of these materials does not establish an attorney-client relationship between you and the ACLU of Nebraska.

Please note the ACLU of Nebraska generally DOES NOT accept telephone or walk-in requests for assistance. In order to request legal assistance, please view the instructions on aclunebraska.org/gethelp.

Has a public official blocked you, deleted your comments, or censored you on social media? Use this resource to learn how you can take action.

Official social media pages for elected representatives and government organizations are generally considered public forums. The ACLU of Nebraska recognizes that censorship by government actors on these pages may be an infringement on Nebraskans’ First Amendment right to free speech.

The First Amendment grants people the right to hold the government accountable through freedom of expression and speech. Just because a public official disagrees with you on an issue doesn’t mean they can silence you. As our democracy increasingly moves online, our First Amendment freedoms must remain protected.

If you have been blocked from engaging on an official social media page operated by an elected representative or government organization, follow the steps below to learn more and take action to protect your rights.

Take photos or screenshots of the social media account that you were blocked from engaging with. Try to include your posts leading up to being blocked if they are still visible or archived.

Follow the flowchart below to determine if your constitutional rights may have been violated. Next, reference the FAQ section for further information.

If the flowchart determines your rights may have been violated, contact the elected official via phone or email and ask to be unblocked (this approach resolves approximately 50% of complaints).

If you receive no response to the above request, download and personalize the ACLU of Nebraska’s Template Demand Letter and send it to the elected official.

If you receive no response from the elected official after 30 days, contact the ACLU of Nebraska at gethelp@aclunebraska.org.

1. Does the First Amendment prevent government officials from blocking members of the public on social media?

Short answer: Yes, but it depends.

2. When is a social media site used for government business?

A social media page is likely conducting government business if the page:

However, this standard does not apply to personal or campaign social media pages. For restrictions to apply, the social media page must be run by an individual or organization operating as a “government actor.”

3. Is blocking always illegal on a site used for official government business?

Because every social media page is different, each instance of censorship needs to be evaluated based on its specific facts. Public officials can block comments not protected by the First Amendment, such as remarks that make a true and immediate threat to another person, incite others to imminently violate the law, or contain obscene language as outlined by the U.S. Supreme Court.

Additionally, government entities and elected officials can establish a content-neutral social media policy, but the policy may not violate the First Amendment, and the policy adopted must be enforced in a viewpoint-neutral and fair manner for all users. In other words, any social media policy must not discriminate against a user on the basis of viewpoint, AND viewpoint-neutral policies must be enforced in a non-discriminatory way.

Comments that praise or criticize the official or government agency on a particular subject are allowed and cannot be deleted or blocked.

4.   Does the First Amendment prevent public officials from “blocking” members of the public from their private social media?

Just because an individual gained public office doesn’t mean they are banned from having a private life or private social media. For First Amendment restrictions to apply, a social media page must be run by a government actor for the purposes of conducting government business.

For example, a mayor’s personal Facebook page, where they post photos of their kids and reviews of their favorite books or movies, does not qualify as an official government page. The mayor can limit their audience and curate messages on their personal page just like any other private person.

Additionally, a campaign page is also not a public forum and highly protected speech by the candidate and their supporters, so many of these issues won't apply to purely campaign pages. However, many times the lines are blurry between personal pages, campaign pages, and official pages, so make sure to double-check the facts and weigh all relevant factors.

Read more about a recent ruling on this issue here: “Missouri State Official Can Block Users From Her Twitter Account, Eighth Circuit Rules”

“Can Elected Officials Block Critics On Their Social Media Pages?”

“Twitter's 'No Replies' Feature Could Cause Problems for Trump” 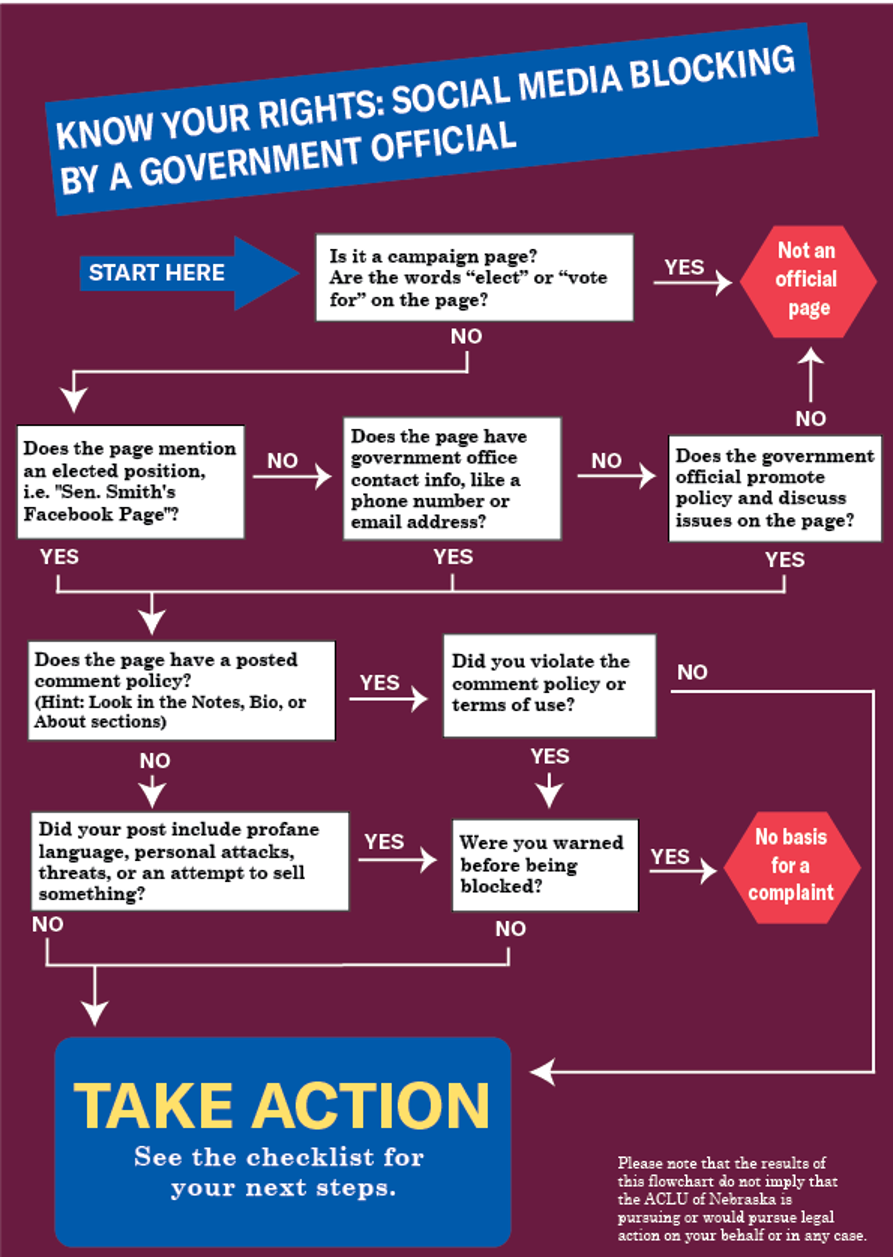 I am writing to you today as a concerned constituent who is no longer able to engage with your office on social media because I have been blocked [[from viewing and/or commenting on]] your [[Twitter/Facebook]] account at [[Insert Official Page Name, i.e., “John Smith’s Facebook Page,” and URL here. I was blocked on or about [[Exact or approximate date]].

Your [[Twitter/Facebook]] page is being used as a public forum where governmental matters such as legislation, policies, and votes—all of which affect me as a constituent—are regularly discussed. My comments have complied with your page's policies (if applicable in that there is a posted social media policy) and blocking me from this interactive and informative space based on the views I express violates my First Amendment rights. Rather than deny my constitutional right to engage in speech, I respectfully ask that you restore my access to your [[Twitter/Facebook]] page.

There are several recent federal circuit court rulings that acknowledge that blocking constituents from social media accounts belonging to government and public officials or organizations is a violation of the First Amendment’s guarantee of freedom of speech.[1]

The message from the courts is clear: when pages are used for government business, restricting speech or blocking individuals from such forums is unconstitutional. Members of the public must remain a part of the conversation and, as such, are protected when they express their views on public officials’ social media pages.

I respectfully request that you and your staff restore my ability to view and interact with your office on social media and uphold your duty as an elected representative to hear my concerns and to simultaneously uphold the United States Constitution in the process.

[1] See Davison v. Randall, 912 F.3d 666 (4th Cir. 2019) (holding that blocking users on social media is viewpoint discrimination where a government or elected official social media user does things like displays their official title, website, and contact information, where a page is used as a “tool of governance” and where government resources are used to support the page); see also Knight First Amendment Inst. at Columbia Univ. v. Trump, 928 F.3d 226, 234 (2d Cir. 2019) (affirming lower court decision that because, inter alia, former President Donald Trump’s Twitter account was presented as presidential and used for official business, his control over it was governmental in nature and needed to comply with the First Amendment); see also Campbell v. Reisch, No. 19-2994, 2021 WL 261992, at *2 (8th Cir. Jan. 27, 2021) (holding that even a “private account can turn into a governmental one if it becomes an organ of official business . . . .”).