Lobby days at the Unicameral bring about a variety of people with different political beliefs, backgrounds, and experiences. For many, it’s an opportunity to make their voices heard on issues that affect them; for some, it’s a change to fight for their rights and basic governmental protection against various forms of societal discrimination and oppression. I fell into the latter group as I made my way into the Nebraska State Capitol Building on Wednesday with around 40 other people to meet with our state senators. This particular lobby day was organized by OutNebraska, a Nebraska nonprofit dedicated to advocacy on LGBTQ+ issues and creating a community of civically engaged LGBTQ+ Nebraskans.

The main focus for the lobbyists was LB627, a workplace nondiscrimination bill that was introduced last year and carried over into the short legislative session. The bill would make it illegal for private employers to discriminate against a potential hire or employee based on their gender identity and/or sexual orientation. In the three different times such a bill has been introduced into the Nebraska legislature, many state senators have retorted that this doesn’t happen in their districts or that they don’t know anyone this has happened to. This is mostly due to the fact that people that this does happen to aren’t going to be vocal about it out of fear of either losing their job or not being able to find another one. 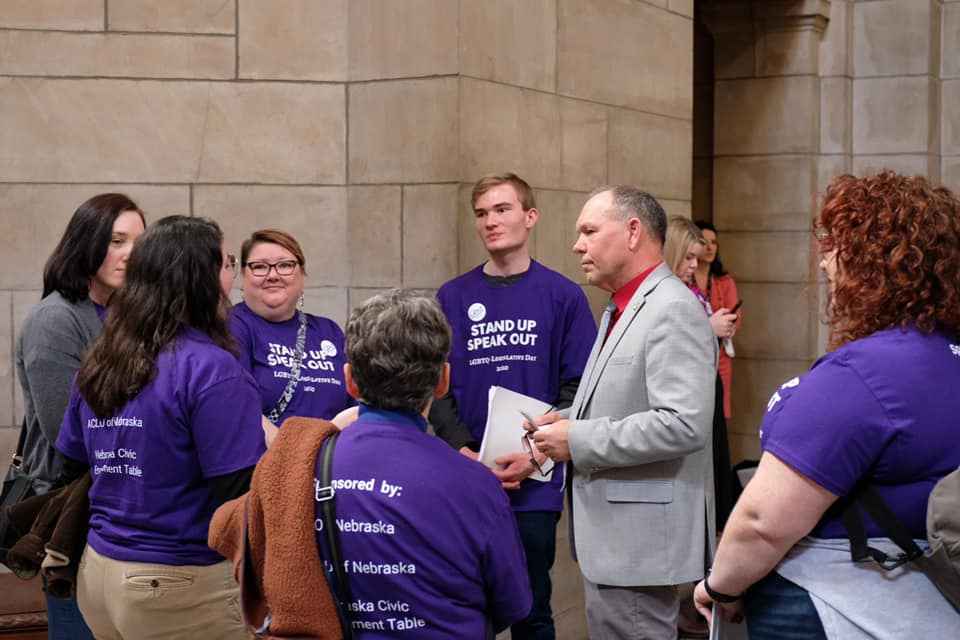 I was able to meet with my hometown state senator, Dan Hughes, and tell him my story. When I was 17, I experienced harassment regarding my sexual orientation from a coworker. I didn’t report the harassment, because I thought I would be fired. I was working 50-60 hours a week and this job accounted for about half of those hours, so I couldn’t risk losing it. At the time, my single mother was working a lot, and I worked to support myself and the family. The combined harassment and fear of losing my job due to my sexual orientation hung over me like a dark cloud for the entirety of that summer. It disturbed my mental health and even the ability to do my job properly because of having an unsafe environment to work in.

My story is not unique and is similar to many more stories of other LGBT+ Nebraskans. Many individuals besides myself shared their personal stories of experiencing discrimination and harassment in their workplace with their senators. We just want to be able to live freely and without fear of discrimination while working to support ourselves and our families. This event was the first of its kind for LBGTQ+ Nebraskans, but it certainly won’t be the last, as we will keep fighting forward for progress and equality.

My fight for a GSA