Nebraska Joins Nationwide, Bipartisan Effort to Empower Americans to #TakeCTRL of Their Privacy

Lincoln, NE – Today, four Nebraska Senators who have introduced legislation to protect the privacy of Nebraskans joined together to raise awareness of concerns a growing number of Nebraskans have about their privacy.

The announcement in Nebraska is one of 17 taking place simultaneously throughout of the country — from Hawaii to North Carolina, from Alaska to Alabama, and from New Hampshire to New York to New Mexico — with a diverse, bipartisan coalition of elected officials and citizens coming together to tell the nation they care about their digital privacy and are willing to join together to fight for it. The message from these collective actions by the states is clear: where Congress is unwilling or unable to act to protect Americans’ privacy, or takes actions that are insufficient, the states are more than willing to step up and fill the void. Together, these states have introduced a range of new legislation that includes protections for student privacy, location tracking and personal data.

"Nebraskans value keeping education under local control,” said Sen. Adam Morfeld who introduced a bill related to student data systems. “The goal of the bill is to preserve the ability of schools to use student information systems, while at the same time protecting student privacy by ensuring that technology providers and other third parties do not access and profit from private student information without their consent."

“The guiding principle for privacy in the United States in 2016 is the same as it was in 1776: ‘Get a warrant, get permission, or get out,’” said Sen. Laura Ebke who introduced a bill related to cell phone tracking technology. “When cell site simulators are operated for specific and narrowly defined purposes, pursuant to court-issued warrant, they can have legitimate law enforcement applications. The problem is that cell site simulators are very imprecise, and cannot help but collect information from hundreds if not thousands of phones beyond those that are approved by the warrant. This creates a substantial risk that cell site simulators can be operated as a tool of mass surveillance.”

“There is a broad consensus in this nation that we need to be more focused on protecting privacy in the digital age,” said Sen. Tyson Larson who submitted a bill pertaining to social media privacy and employers. “Permitting employers and prospective employers to demand access to an individual’s social media accounts constitutes a significant violation of personal privacy and would have a chilling effect on free speech. Nebraskans cannot wait for the federal government to act and I encourage my colleagues in the Unicameral to join with me and advance these important protections for our freedom this session.”

"Today I'm not only standing up for the privacy of all Nebraskans, I'm standing for wise use of our tax payer funds,” said Sen. Matt Hansen, who introduced a bill related to automated license plate readers. “The legislation I've introduced would not only allow Nebraskans to have more control over their privacy, but it would promote a more efficient use of Law Enforcement funds."

“Every person should have the power to decide who they want to share personal, private information with. Privacy is not about keeping secrets, it is about exercising control over our own lives,” said Danielle Conrad, Executive Director, ACLU of Nebraska. “We’re grateful to Senators Ebke, Hanson, Larson and Morfeld for their efforts, which affirm that privacy remains a core value in our state and throughout the United States of America.”

In 2013, the ACLU of Nebraska discovered that taxpayer dollars were being spent on automated-license plate reader technology that frequently broke and was never used in connection with an arrest or conviction. The documents obtained by the ACLU showed the technology was deployed at the funeral of someone suspected to be involved in gang activity.

The bipartisan actions by the states, which are intended to highlight the strong and diverse nationwide support for legislation that empowers people to take control of their privacy, are mirrored by the results of a recent poll conducted by Anzalone Liszt Grove Research, which found that 90% of Americans believed (73% of them “strongly”) that the next president should make “protecting privacy so we have more control over our personal information” a policy priority.

The 16 very diverse states plus the District of Columbia making announcements have the ability to impact nearly 100 million people, and they collectively account for 169 electoral votes.

LB 692 (Student online privacy), introduced by Sen. Adam Morfeld.
In today’s schools, highly sensitive and highly personal student information is being uploaded to remote third party servers (“student information systems”). Despite the sensitivity of this information, limitations on access to and use of this information by third parties and school officials are frequently weak or non-existent, which means private corporations often have easy access to detailed information about our children, without us ever knowing about it. This model bill is designed to retain the benefits of these important technologies while empowering parents and students to reasonably restrict who has access to and may utilize their personal information.

LB 738 (Cell site simulators), introduced by Sen. Laura Ebke
Cell site simulators, which are often referred to by the brand name StingRay, are devices that trick cell phones into revealing their location and other information to the simulator device (imagine, in the language of the children’s game, that a StingRay yells out “Marco” and all cell phones with its range have no choice but to answer with “Polo”). While StingRays hold value as a law enforcement tool, they can sweep in cell phone data from hundreds if not thousands of other phones that are not part of an investigation. This model bill makes sure that StingRays cannot be used to indiscriminately gather and retain location and other electronic information from large numbers of people’s cell phones “just in case” one or more of them is doing, or might someday do something wrong.

LB 821 (Workplace Privacy Act), introduced by Sen. Tyson Larson
Americans today are as likely to use a social media account to communicate their ideas to a selective audience they were to use a telephone a generation ago.  This vibrant forum for the exchange of ideas and personal information will be compromised if employees and prospective employees know they may be forced to provide employers with access to their personal social media accounts. This model bill prohibits employers from forcing or coercing their employees or job applicants into providing access to their personal social media accounts, except under a limited set of specifically defined circumstances.

LB 831 (Automatic License Plate Readers limits), introduced by Sen. Matt Hansen
State and local government agencies are increasing deploying devices called automatic license plate readers (APLRs), which are capable of reading the license plate of every vehicle that drives by their lens, to monitor and record vehicle locations. While ALPRs have many beneficial uses, ranging from toll collection to locating cars involved in child kidnappings, they also have the collective ability to record the locations every car has traveled to in a town, city or state for months or even years.  Because creating a record of where people travel can reveal highly personal information – such as whether a person sees a psychiatrist, attends AA meetings, goes to particular religious or political meetings, or is having an affair – this model bill seeks to ensure that, absent a warrant, ALPR records of where citizens who are not suspected of a crime travel are deleted within a short period of time. 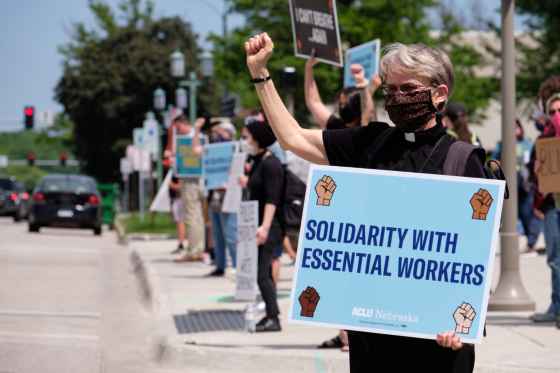 ACLU of Nebraska and Nebraskans for Civic Reform Urge Secretary of...

ACLU of Nebraska Urges Investigation Regarding Lethal Use of Taser...