Last week, the Supreme Court released a decision that it was unlawful to discriminate in the workplace on the basis of sexual orientation and gender identity. Upon waking up in the morning and reading this decision, feelings of joy and relief washed over me like a tsunami, nearly knocking me breathless. I began crying and contacted my partner, letting them know that we won; that once again, love won.

It was in the summer of 2017, shortly into the current president’s administration, the Department of Justice had filed an amicus brief that sexual orientation and gender identity were not covered under protections against discrimination in the workplace on the basis of sex. Hearing this announcement shattered me; I had woken up while on a vacation with friends to news that I should be able to be fired from my job for who I love and who I am. Even though I hadn’t had those protections in the first place, it was a clear message to myself and others that we weren’t welcome in our own country. This was only further affirmed by the Nebraska Unicameral’s inability or unwillingness to pass legislation to protect individuals from workplace discrimination on the basis of sexual orientation and gender identity.

Last year, Sen. Patty Pansing Brooks showed true leadership by introducing a workplace nondiscrimination bill into the Nebraska State Legislature that would protect workers on the basis of sexual orientation and gender identity. When that bill was introduced, I spent hours calling Nebraskans and connecting them to their state senators to tell them to support LB627. The day of the public hearing, I testified in front of my state government for the first time about my experiences being discriminated against in the workplace due to my sexuality. After the bill rolled over to the 2020 legislative session, I volunteered with OutNebraska for Nebraska’s first ever LGBTQIA+ legislative lobby day. I met with my hometown state senator, Sen. Dan Hughes, and talked about the importance of this bill to people like me who experienced discrimination in a rural area without many other job opportunities available. 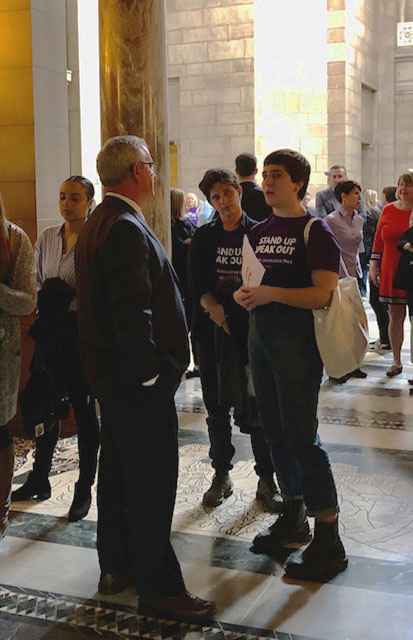 Nebraska’s state motto of Equality Before the Law will ring truer when Nebraska state law comes into compliance with federal law, making it clear there is no place for discrimination on the basis of sexual orientation and gender identity. Since the legislative session is postponed until July 20th due to COVID-19, we are still waiting for LB627 to be voted on. Even though we now have protections in the form of a Supreme Court ruling, it’s still important that we pass workplace nondiscrimination legislation in the Unicameral. A lot of major civil rights decisions happen in the courtroom, but this type of social and legal progress should also be written into our civil laws to ensure that Nebraska really is for everyone.

Contact your state senators’ office now and ask them to support LB627 when the legislative session resumes. Also, don't forget to request a Pride Package to celebrate while staying socially distant!